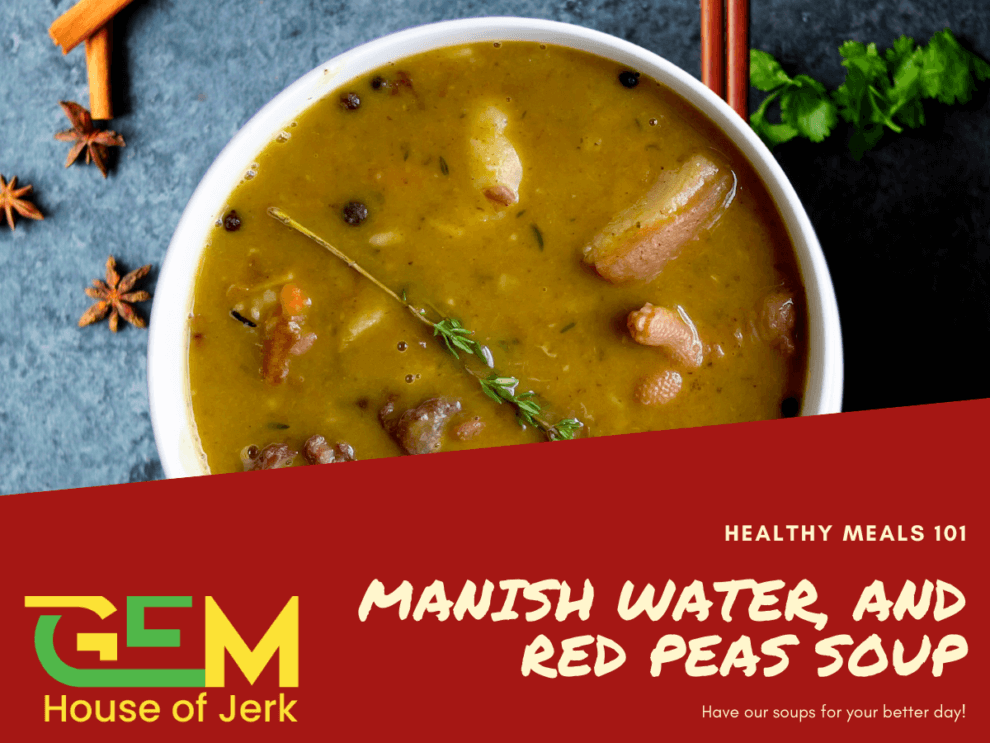 Mannish water, and red peas soup! Have you wondered what are they? Two of the most popular, tasty, hearty Jamaican soups. Traditional soups made of lots of ingredients. They also include meat specialty versus other cuisines. The Red Peas soup may have chicken legs, beef bone or pig tail. While the Mannish Water contains goat head and feet. Both include a plethora of ingredients. The many foods combined give off the special flavour.

Your Mannish water, red peas soup get prepared hot and spicy. They start with slow-cooking meats followed by various veggies. Gem’s Jerk staff looks after cooking it well. In your Mannish water you’ll find yam, potatoes, green peppers, green bananas. A taste of dumpling takes away the strong veggie taste. It makes the filling in the soup. Dumplings go into the soup towards the end and the spices, too. For example, garlic, pimento seeds, Scotch Bonnet pepper make an awesome taste. The red peas soup initiates the cooking of various red kidney beans with garlic. Then, the meat is added followed by different veggies. It includes turnip, the unique chayote (Cho-Cho), and carrots. Add yam and Jamaican coco for a distinctive taste. Among the red pea soup spices are thyme, pimento, and Scotch Bonnet pepper. That’ll make your full soup!

What could be more enticing to enjoy on a cold winter day! A hot, hearty and delicious Mannish water, and red peas soup to make your day great. Have our soups for your better day!